From Hollywood to Bollywood, Lake Como is The Hot Choice To Holiday

Lake Como is among the top tourist destinations of Italy. From Bollywood to Hollywood there are several actors who have raised its value by their frequent visits.  Weddings, A list parties or film shooting, stars choose Lake Como to make treasured memories. You have heard more about George Clooney connections but not just he, several more people from film business all over the world have great affinity with this place in Italy.

Recently Asin, the Indian film star particularly known in Bollywood for films like Ghajini, visited Lake Como with her newly-wed husband Rahul Sharma, the Indian businessman and the co-founder of Micromax. During this trip of theirs, we got to see some amazing shots of Lake Como through her Instagram. Evidently, celebrities like George Clooney, Salma Hayek, and Kim Kardarshian absolutely love Italy, but we’ve few more facts you don’t know yet about Lake Como’s connection with film stars. Finishing this will tell you more on it; let’s check Asin holidaying in Lake Como first through her social media pictures.

Akshay Kumar who was vacationing nearby too dropped in to say hi to his clos pal Asin and her husband Rahul on learning about their trip. Catch a glimpse below.

Lake Como is a popular tourist destinations and particularly for cine world as many movies and series have been shot here. The connection begins from the age of Lumière brothers who have taken several of their popular shots in the city. The journey extends to the times of Alfred Hitchcock and Italian director Mario Soldati, among who the former shot his first movie in Lake Como and the latter shot “Piccolo Mondo Antic in 1941. From then to now this beautiful abode has been picturised in various romantic, comedy, suspense movies and thrillers like James Bond 007 – Casino Royale, Oceans Twelve, Star Wars: Attack of Clones.

It’s not just the nature and beauty of Lake Como that brings tourists from all over the world towards this part of Italy. The beautiful villas built along the banks of the lake make too it a perfect abode for travelers. The good part is that you have both the options, to buy and rent Lake Como villas.

It’s been decades that visitors love Lario, the other name for the lake of glacial origin in Lombardy. And this love seems to be unscathed and permanent for years to come. 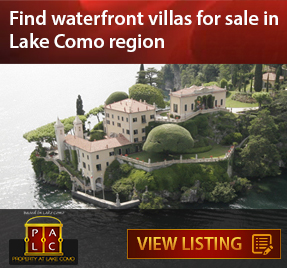